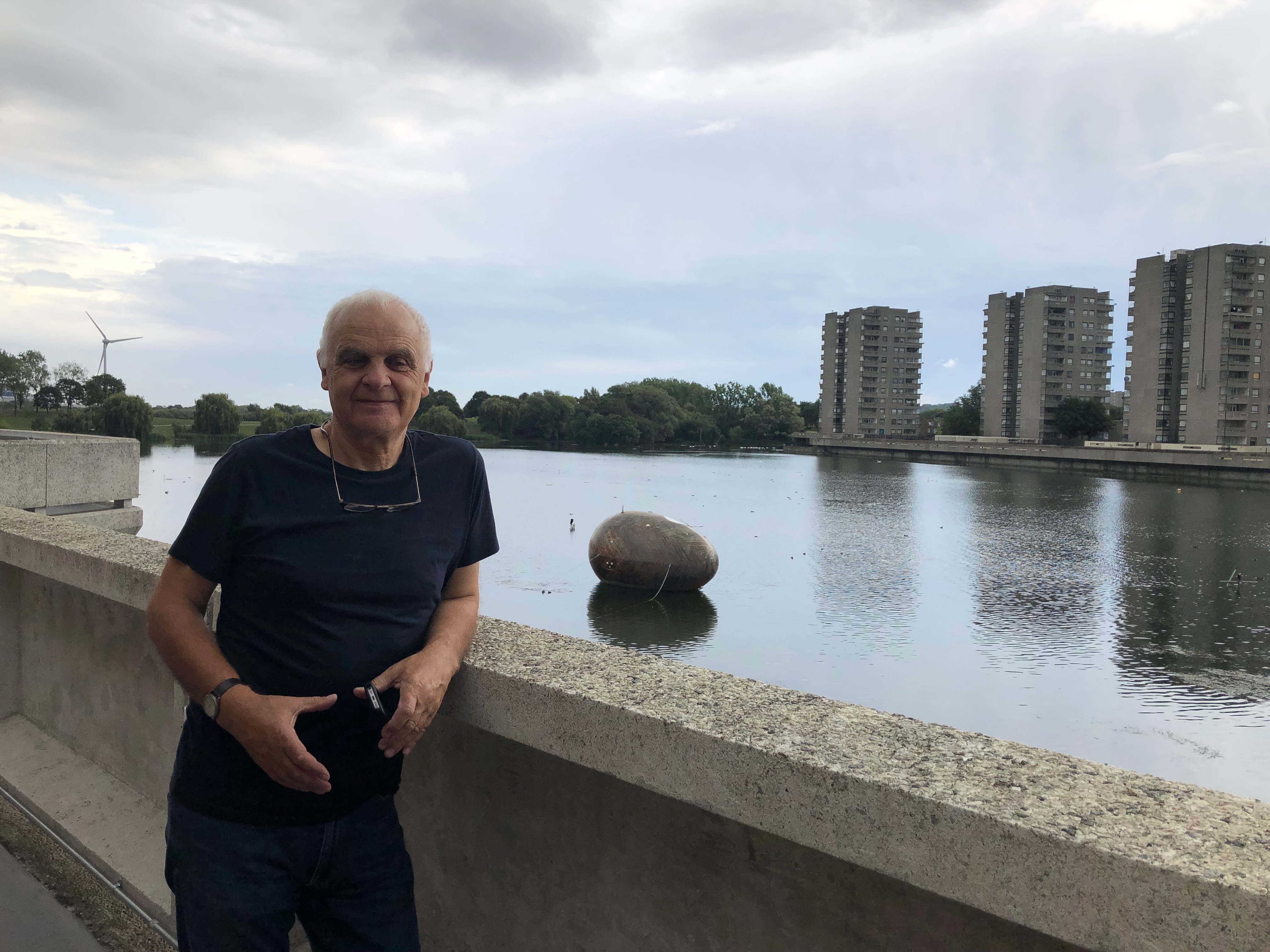 Stephen Turner – also known as ‘The Eggman’ – is bringing his Exbury Egg to Thamesmead as part of his international project, ‘Natura Prima?’ in Venice and London. The Egg will be floating on Southmere Lake from July until August 14th 2019 when it will be relocated within the grounds of the newly refurbished Lakeside Centre until July 21st 2020.

During this time Stephen will be working with Bow Arts Trust studio artists Joseph A Griffiths, Bhajan Hunjan, JD Swann (appearing courtesy of Calum F Kerr) and Dani Tagen. They will be developing new artworks to explore our relationship with nature and place, at a time of huge environmental change. The Egg will also be used for related meetings, conversations, and exhibitions throughout the year.

“As climate change redraws our shorelines, I thought it would be interesting to look at two places built against the background threat of rising sea levels. If Thamesmead has gained the name of the town on stilts, Venice has long held the record since its founding in the 5th Century AD. In unique ways, both have pitted human invention and ingenuity against incursion by the sea to sustain the presence of people.”– Stephen Turner

Turner gives a voice to mute nature, and his work examines the complex relationship between people and their environment. He encourages dialogue between different communities, addressing the need for a more holistic approach to life and wellbeing. In an anxious age where science, faith, politics and economics no longer provide the certainties of old, Turner’s projects explore the theme of uncertain futures through a range of media including performance, drawing, painting, sculpture, and video.

Lakeside Centre is exhibiting a small selection of work that Stephen has made throughout the Venice-London project, including a large-scale image of a bi-dimensional egg made from donated waste plastic. His recent exhibition at Fondazione Bevilacqua La Masa during La Biennale di Venezia, showcased 17 years of Stephen Turner’s work and includes the celebrated projects The Exbury Egg, Seafort, Materia Prima, Urban Fringeand Cella, his 21st Century temple to the seashore, commissioned by Turner Contemporary.

Embedding himself with residencies in Venice and Thamesmead – two very different examples of our built environment – Natura Prima? now launches at the Lakeside Centre, epitomising the themes that have run through Stephen’s work ever since he lived for a year in the Exbury Egg in 2014. Reporting from his residencies and encouraging dialogue between different communities, Turner asks what is our relationship with nature and what footprints do we leave behind?

Stephen comments “In an urban 21st century world where we are increasingly disconnected from nature I wanted to use this ancient archetypal symbol to nurture re-enchantment with the natural world, as a step toward a sustainable future”