This is the Solstice

of the Sun, its cusp and midnight

and unlocking, where the past

lets go of and becomes the future

The place of caught breath, the door

of a vanished house left ajar.

The mid-winter gathering around ‘Stephen Turner’s Exbury Egg’ at the Lakeside Centre drew a steady stream of curious folk from the neighbourhood on a chilly Sunday afternoon.

The Eggman created a stylised landscape of floodlit feathers and leaves as a ’stage’ in the Egg for Rich Sylvester and JD Swann to perform in. Outside we put up bunting and a colourful parachute awning for shelter. A small fire pit was lit to keep people warm and for toasting large marshmallows (the original source, of which being stems of marsh mallow plant which can still be found around here). Hot mulled ‘wine’ as well as a huge Southmere swan shaped mince pie designed and baked by the Eggman added to the festive spirit and sense of occasion.

We stood round the fire and swapped stories of Thamesmead. Rich had spent time researching the distinctive character of the place; looking at local history books provoked recognition of the characters and neighbours featured and then triggered stories which had become urban legends.  From there, chat led back to the wider landscape well beyond living memory when the Thames lapped the walls of Lesnes Abbey and Thamesmead was just part of a marsh that spread from Southwark to the Isle of Sheppey in Kent.

We climbed into the Egg and a cosy storytelling session continued. Archeology and local finds of sharks teeth faded into folklore as Rich shared tales of John Taylor, a Thames Waterman known as the Water Poet, who built a boat of paper with the aim of rowing to the isle of Sheppey. His poem recording the event said that he kept it afloat with sheep bladders. Local ornithological investigator JD Swann made a guest appearance reading poetry selections from Chaucer, John Clare and Coleridge – along with his own bird-friendly poems. He signed free copies of the “Best beaks” poster – his extraordinary image of a bird made up of the “best parts” of the birds around Southmere Lake (as voted for by local people).

The story of “Killing the Goose that laid Golden Eggs” followed, with some debate around the meaning and moral of that tale, before the Egg emptied as people headed out to see a clouded sun sinking and setting over Plumstead at 3.54pm on this shortest day. In the growing darkness of the longest night, it filled up again for more stories and for the Eggman to relate the story the Eggs’ conception, construction and cultural context, before a final spontaneous chorus to the tune of “When the Saints go marching in” (“When the sun begins to set. I want to be in the Egg “ etc. )

People lingered and chatted as it grew dark. The Egg had given everyone a safe haven, a hosted space to share food and thoughts and laughter in the heart of the community. As our guests left they were given the gift of a small feather ‘donated’ by the birds around Southmere Lake as well as bags of swan food, so they could return the favour to the birds. A small A5 flyer produced by the Eggman was also available, explaining the context and history of the Solstice, its importance worldwide and the value of tuning in to nature.

About 28 people of all ages attended. Including four of the artists who live and work in the locality. Gary Drostle a mosaic designer / maker with a studio at the Lakeside Centre had a Winter Solstice open day himself, with the idea of mutual support and sharing of visitors.

Given the time of year, with so many people already away for Christmas or in the throes of last minute preparation, we were pleased both with the numbers attending (about 28) and their great enjoyment of the event.

It had been widely advertised in the Thamesmead Newsletter produced by Peabody and distributed to every household hereabouts. The Bexley Council website listed the event and Bow Arts included it in their own e-mailed newsletter. The Eggman produced a poster that was widely distributed electronically and physically in the local library and on the fencing around Southmere Lake. Three different local Facebook groups also posted the event information.

The Eggman was grateful to local photographer Paul Elliot for permission to use his atmospheric photographs around Southmere Lake in his digital film of the event, and to Bee Kavanagh, Steve Mace and Julie Turner for giving up their afternoon to mind the fire, give out Solstice gifts and tend to the food and wine. 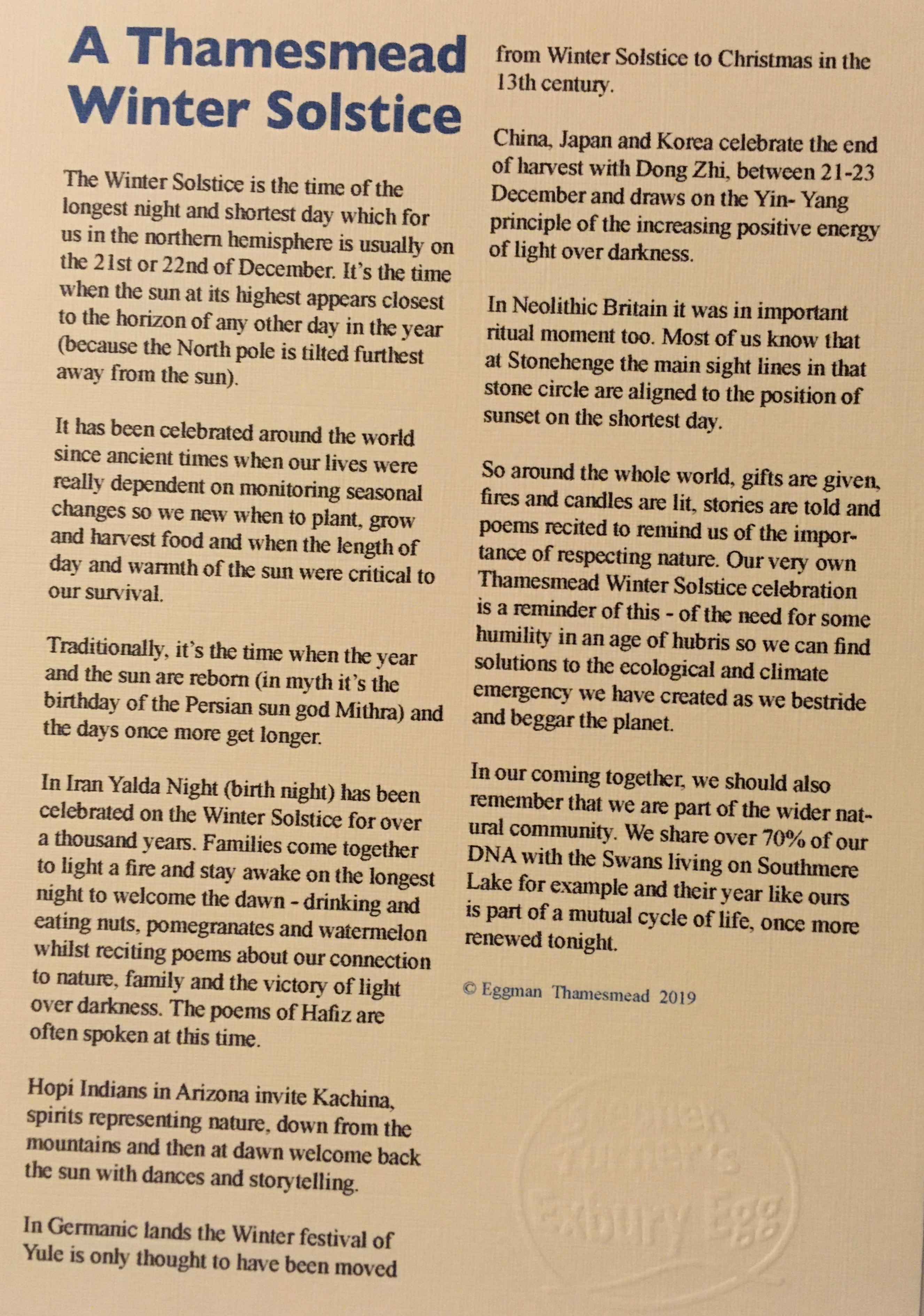