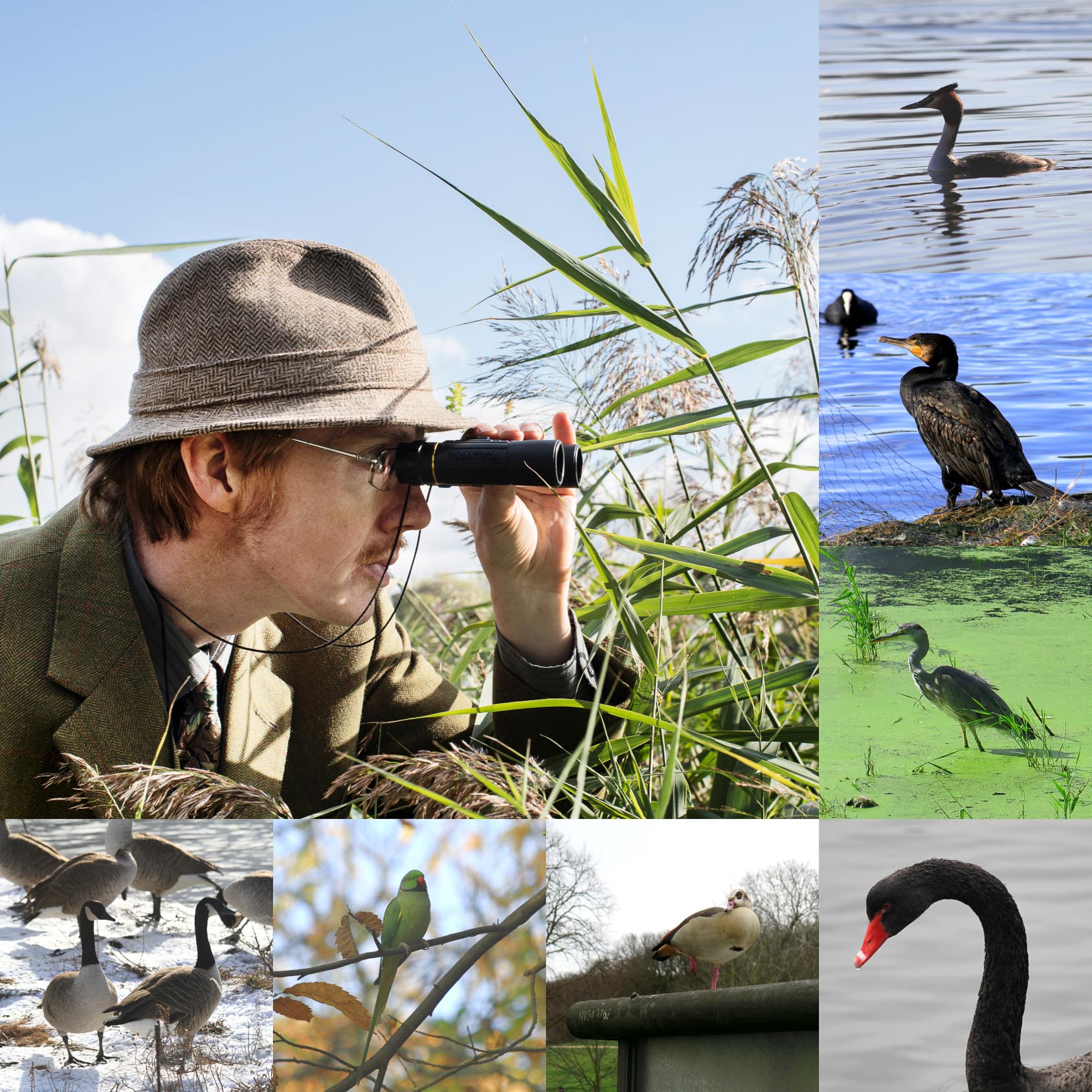 JD Swann is broadcasting tomorrow at noon, with ‘Thamesmead’s Best Beaks’ on RTM FM (Radio Thamesmead). This is Episode 6 of a series that began with an interview of the Eggman, Stephen Turner and has included JD Swann’s own occupation of the Exbury Egg.

For the last of the series J D hears and reads tales of nature from residents of Thamesmead and walks on encountering its many wildlife surprises. Featuring bird music, bird poetry, several Guess That Bird challenges, and an Egyptian Goose waiting for the bus.

Thamesmead’s Best Beaks on RTM is supported by a bursary from a-n The Artists Information Company and Arts Council England.

The following link is to the Eggman’s story about the Swans of Burnley Wood in Lancashire in 2016, commissioned by SuperSlow Way (https://superslowway.org.uk) as part of their series ‘People, Place, Time & Space’. A version of this will feature in ‘Everything from the Egg’ – a new book due to be published later this year by The Artist’s Agency (https://www.theartistsagency.co.uk); a meditation on the life and times of the Exbury Egg and its Eggman 2012 – 2020. 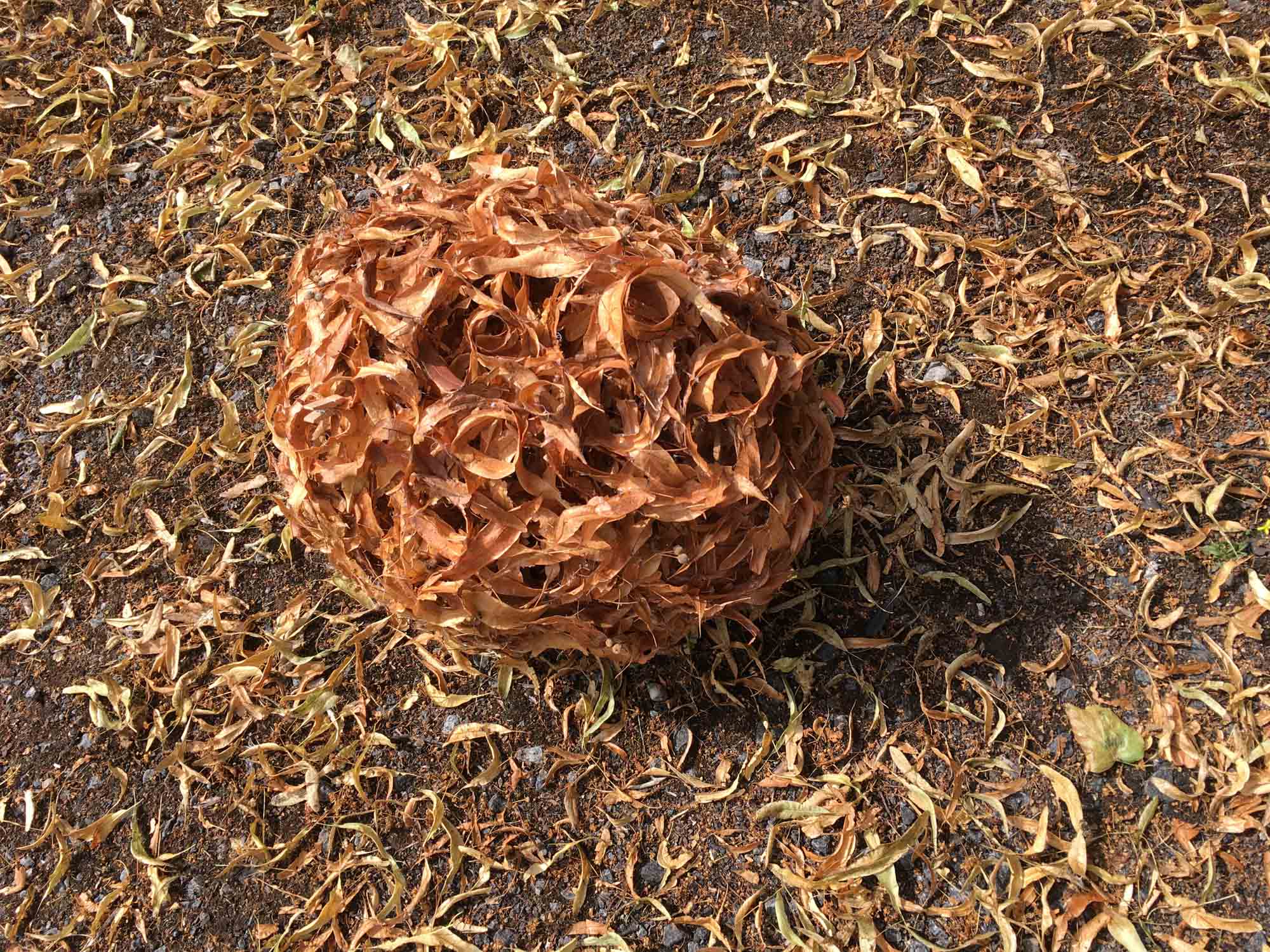 This time last year I made this egglet from the falling bracts and seeds from the linden tree beside the Egg at the Lakeside Centre in Thamesmead. I made this image one year on today, beneath the lime in my neighbours garden in Dewsbury.

Yesterday marked the anniversary of the Exbury Egg being floated on Southmere Lake in Thamesmead. She was on the water for a month and then relocated for community use as a guest of the Lakeside Centre managed by Bow Arts Trust.

A lot was planned to happen between March and now, but Covid19 just brought everything to a full stop. The Egg was due to leave this week for waters new, but remains so that we can eventually complete the project with installations by two Thamesmead based artists – Dani Tagen and Bhajan Hunjan and hopefully a farewell exhibition. Before this I need to do at least a week of essential repairs  as soon as the lockdown eases sufficiently for me to visit and work on site. Hopefully not at all long now, the way things are going.

Many thanks to Thamesmead photographers Paul Elliot and Dave Cooper for remembering the anniversary yesterday and posting on facebook. Paul’s is the very 1970s effect black and white image and Dave was in command of the airborne division! Kind regards to all my friends in Thamesmead. 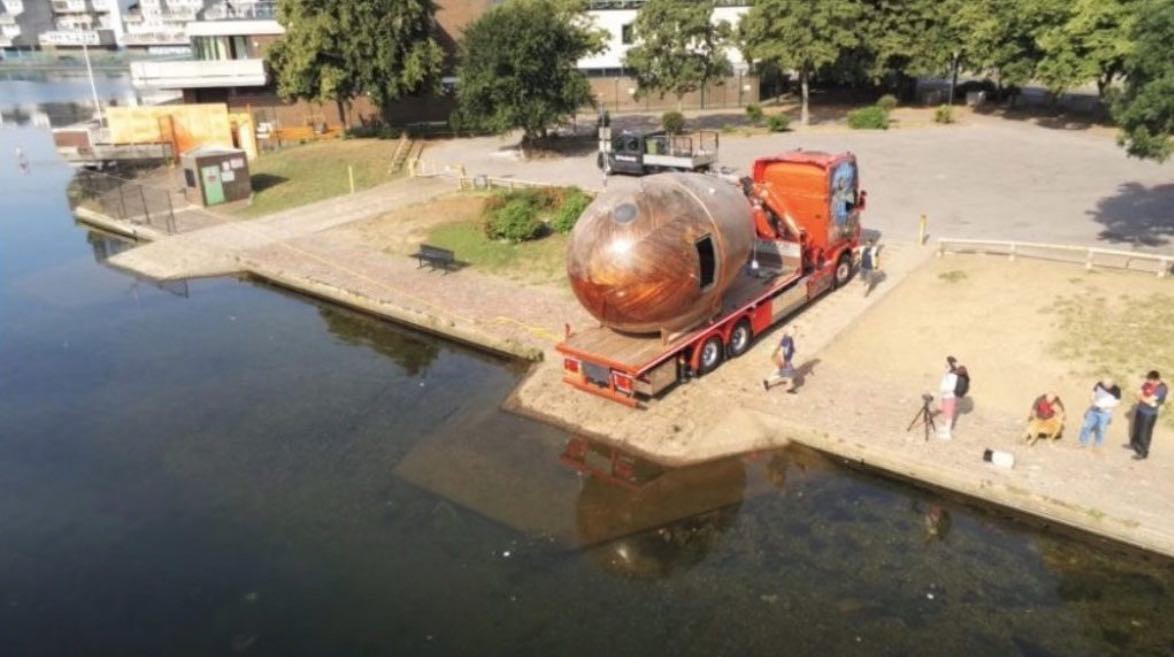 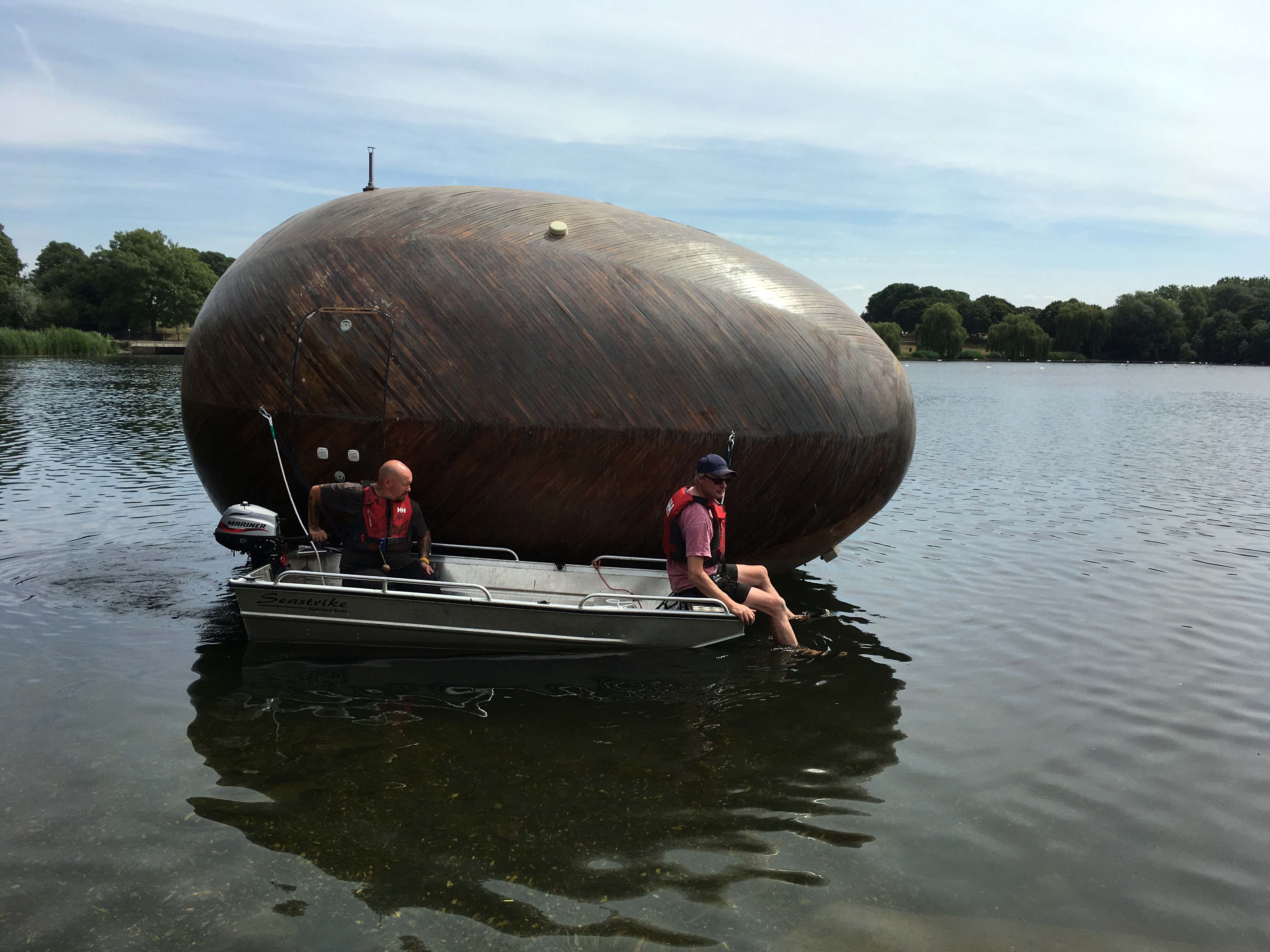 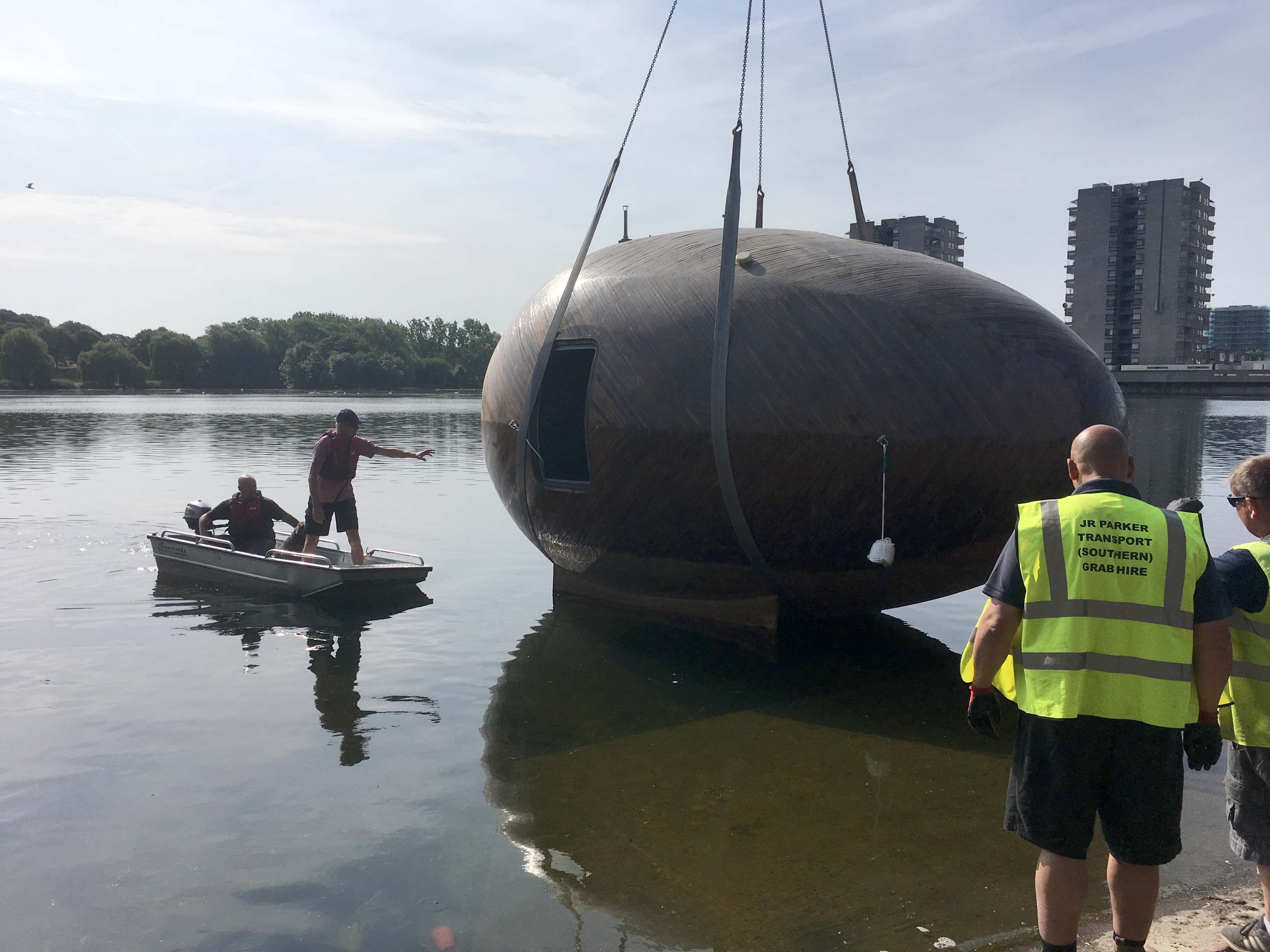 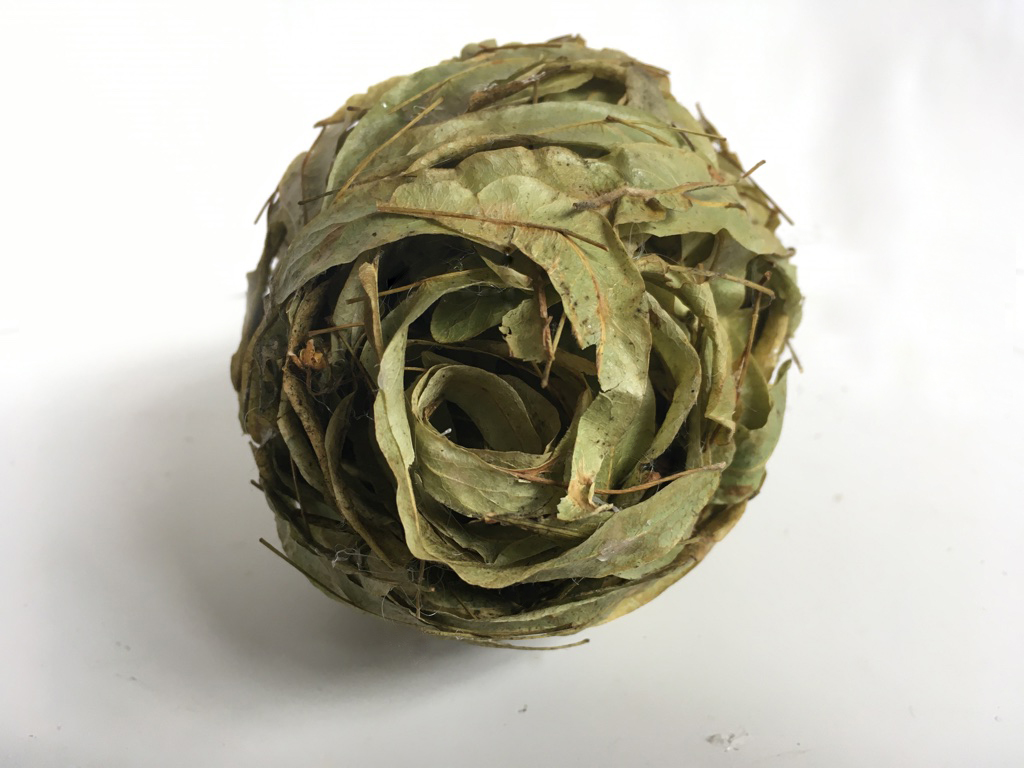 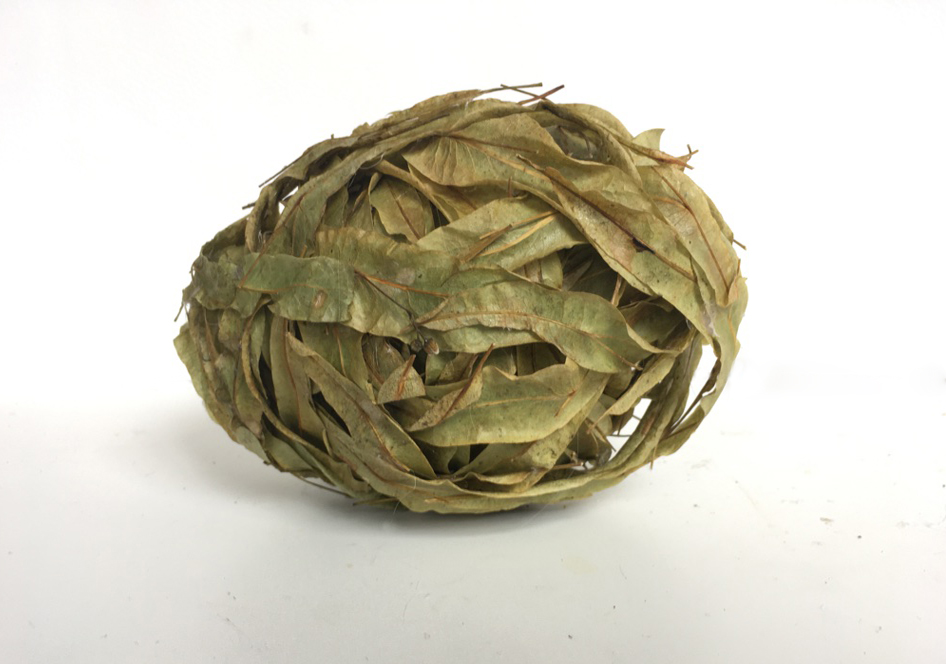 After making a tea from the Linden’s delicate and small yellow flowers, I made this ‘egglet’ by fastening together and then winding up their leaf bracts.

Please do visit the site of RTM radio for the full show of JD Swann’s new show, including his interview with the Eggman. Click on the image below… 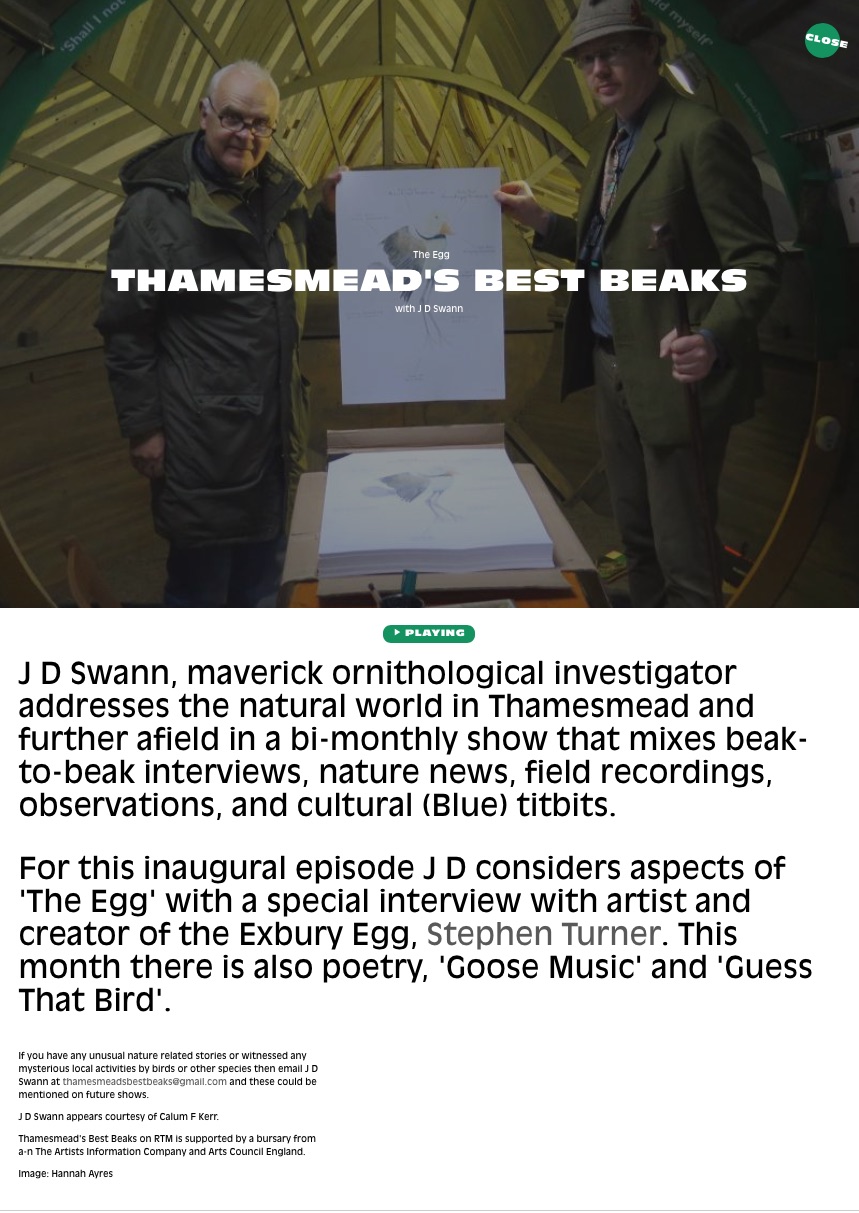 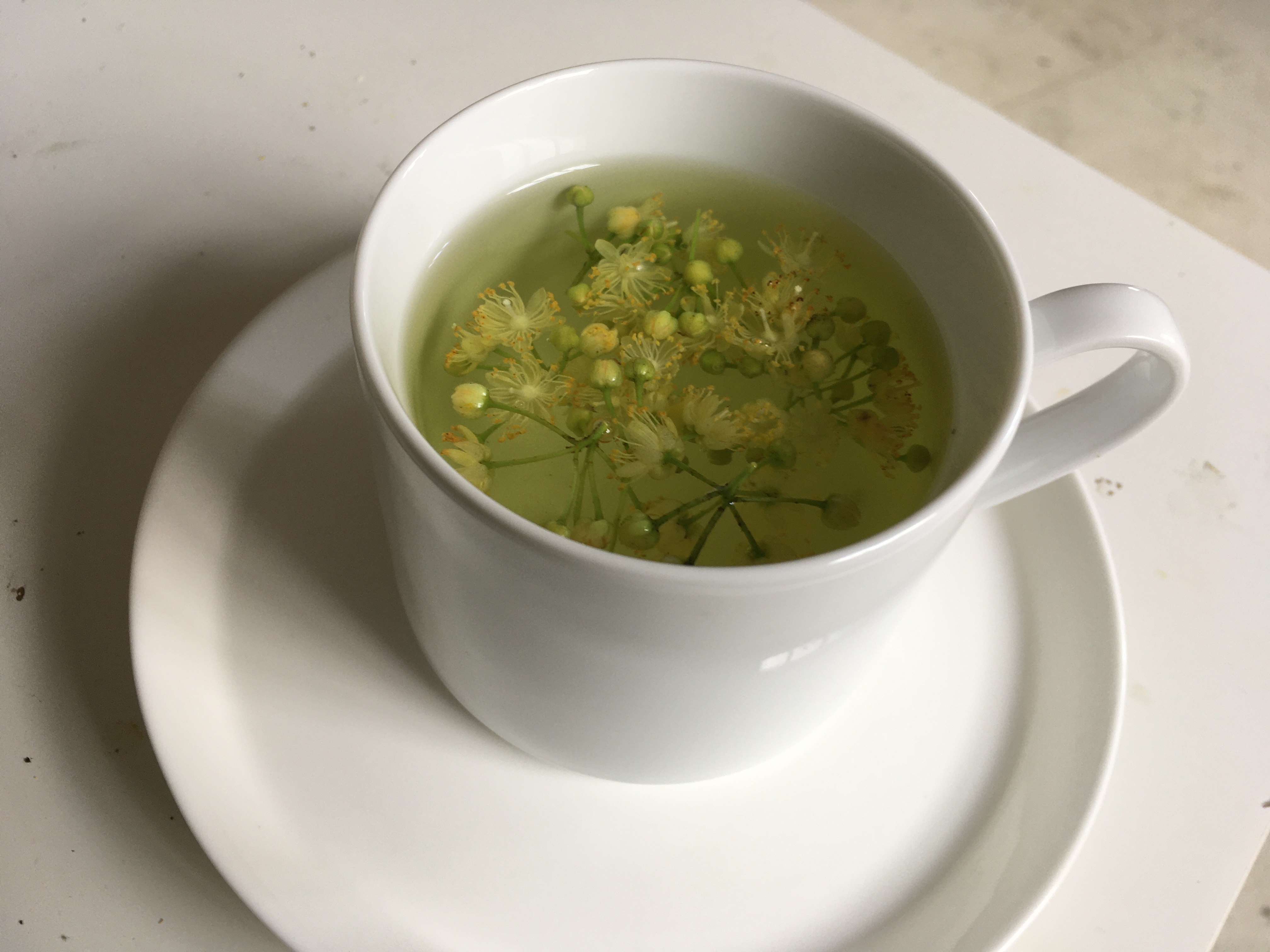 The lockdown because of COVID19 has been a stressful time for the great many of us.  I can recommend a relaxing cup of Linden (lime) flower tea and now is the time to pick them. I’d intended to collect those overhanging the Egg at the Lakeside Centre in Thamesmead and provide tea in the Egg for the enjoyment of local people. It was not to be.

However, I am fortunate to have a lime overhanging my house in Yorkshire in full, if discreet, bloom and I was able to pick sufficient for a few good brews. I separated flowers from the green leaf bracts they are attached to (and which later act as whirly wings to carry the fertilised seed away) and rinsed and dried them all. I found quite a few insects had made a home there, including many tiny exotic looking ladybirds in their larval stage.

I hope any readers in Thamesmead will be encouraged to go out and visit the local Linden trees, pick a handful of flowers, make a brew and unwind too. Best wishes from Yorkshire. 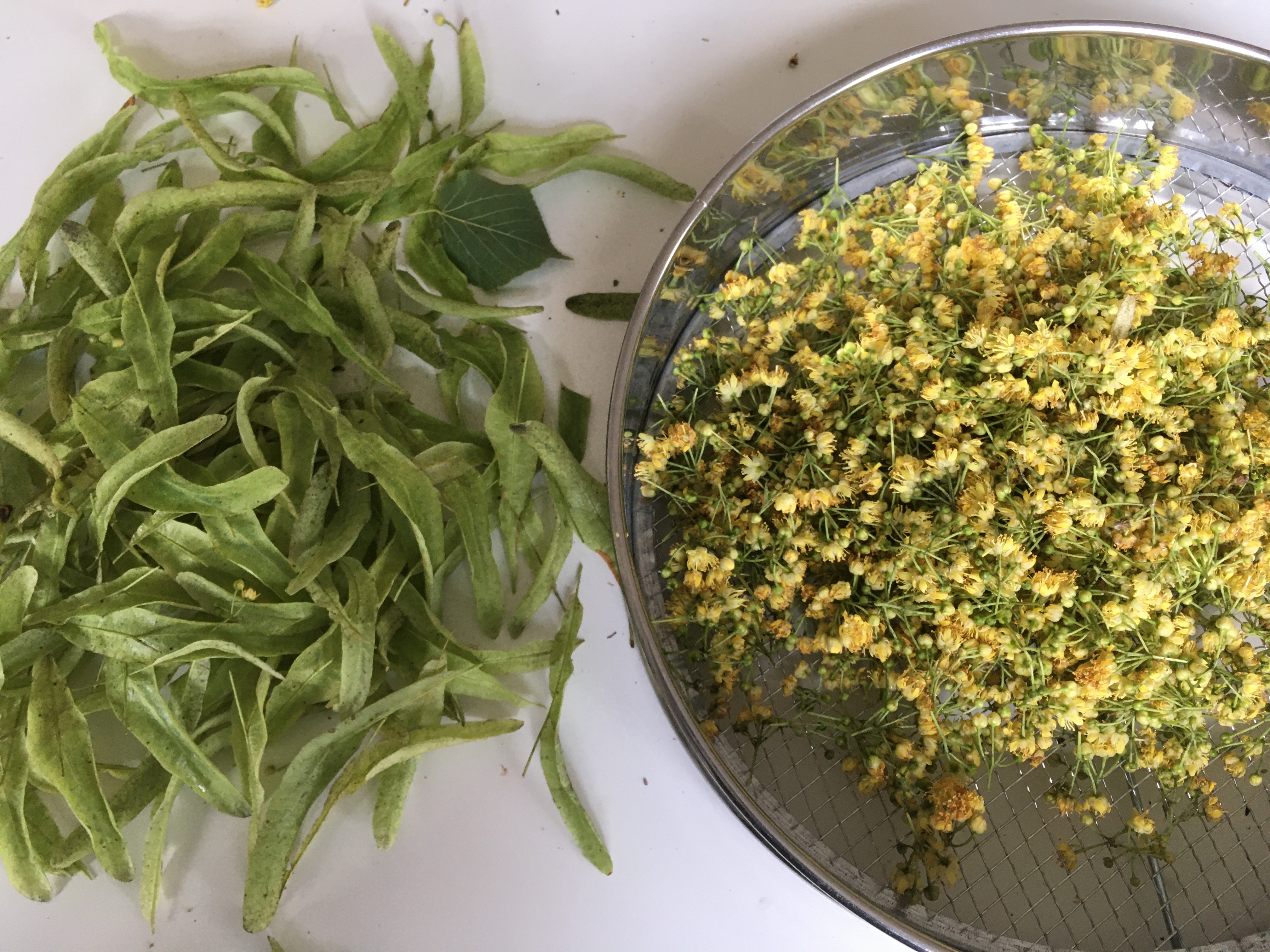 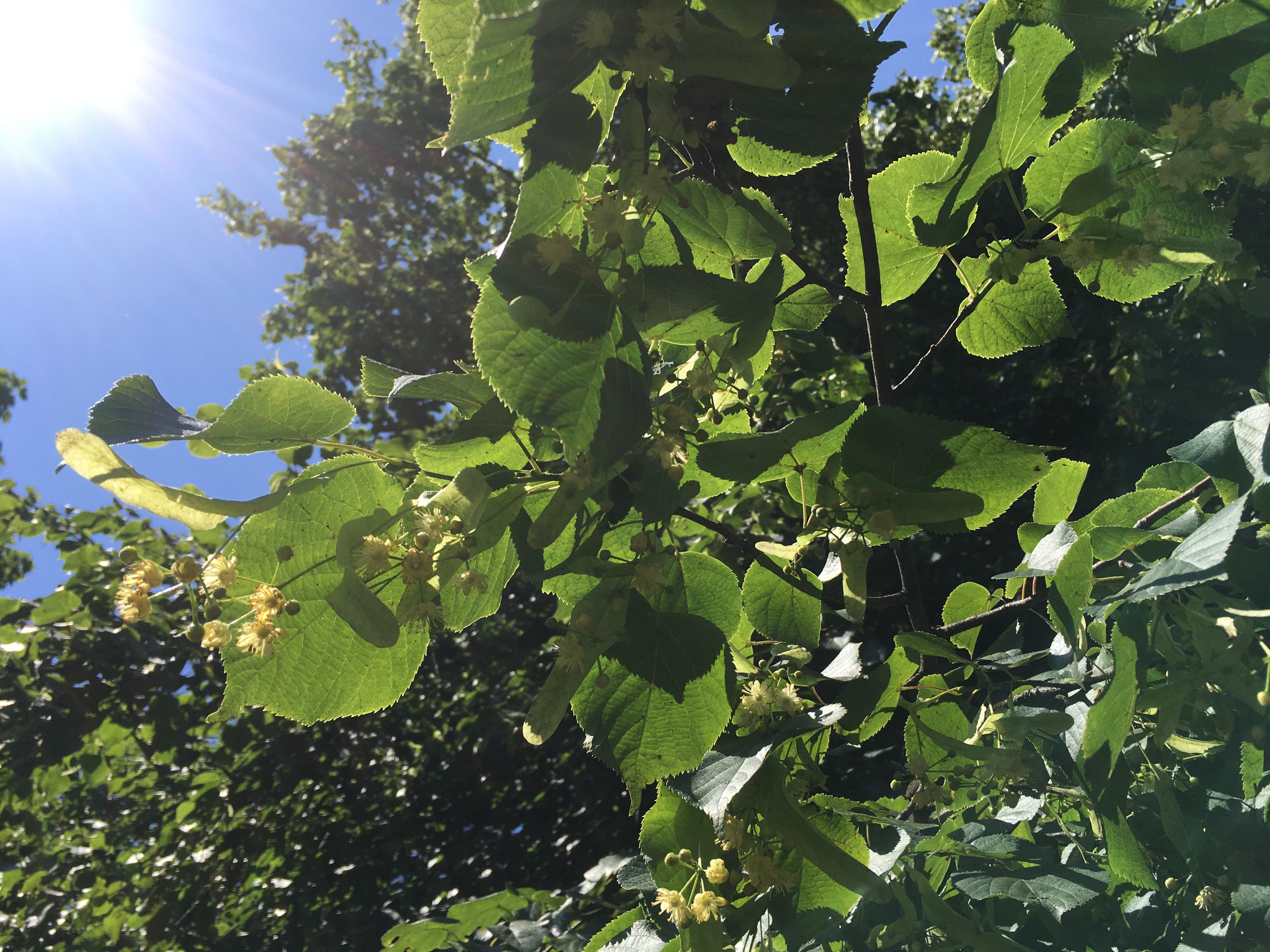 Local people in Thamesmead have until June 30 to make an entry into the competition ‘Get Arty’ exploring art in nature. Thamesmead Now are inviting local residents, of any age, to create an art piece inspired by nature. You can use natural materials like leaves, sticks and petals, take a photo or write a poem. If you’d like some inspiration, local artist and writer Joseph Griffiths has created a video. A link to Joseph’s video is below, part of which was filmed inside The Exbury Egg, still on station at Bow Arts Lakeside Studios beside Southmere Lake.

Click here: https://bit.ly/2ZBTXYU for more information on the competition. 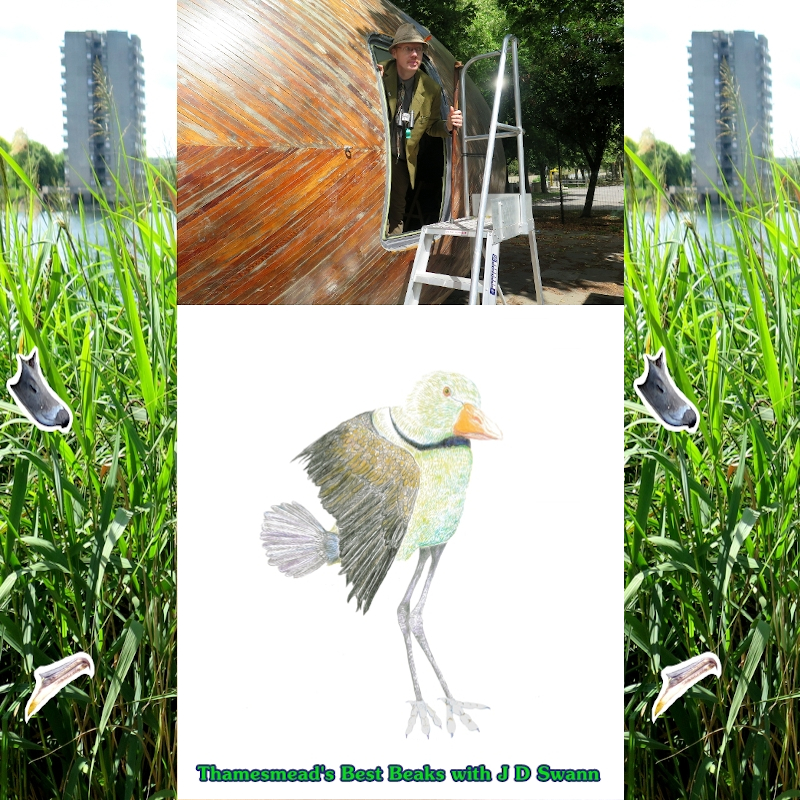 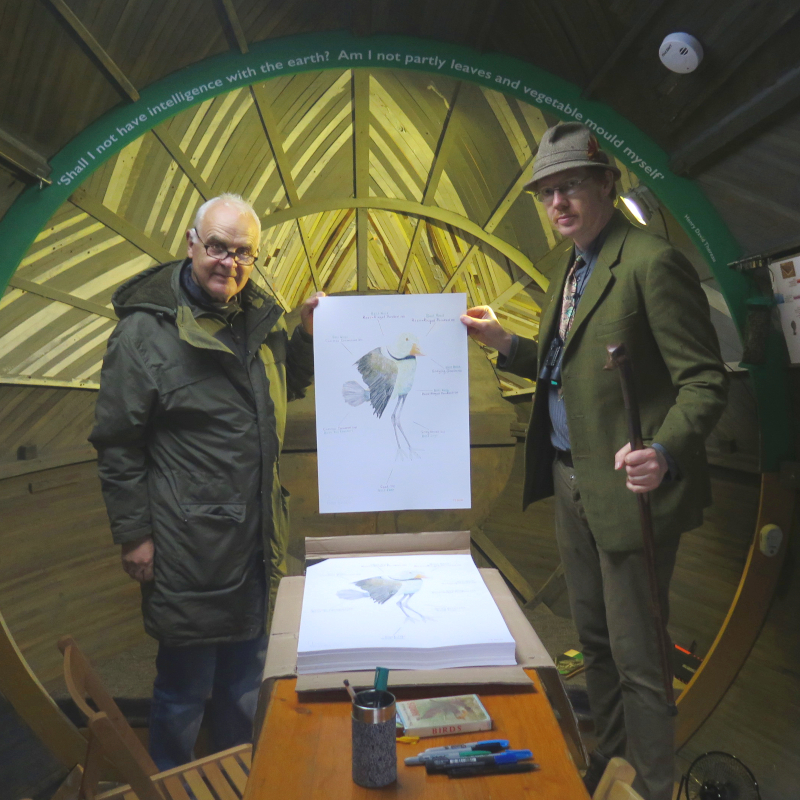 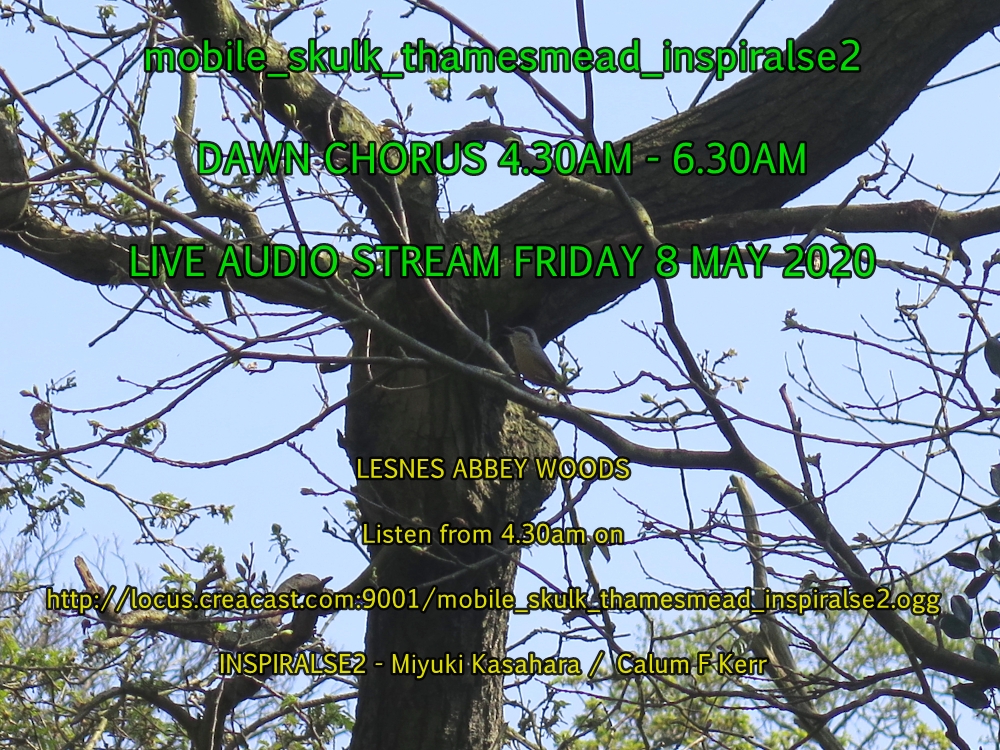 Early tomorrow morning associate artists Miyuki Kasahara and Calum F Kerr  are doing a live dawn chorus stream from Lesnes Abbey Woods if you’d like to hear. Calum is better known to viewers of the Eggman site for his ornithological investigator J D Swann. The audio stream will not work until tomorrow at 4.30am when it goes live on
http://locus.creacast.com:9001/mobile_skulk_thamesmead_inspiralse2.ogg